There’s a formula for success… but do you have what it takes? 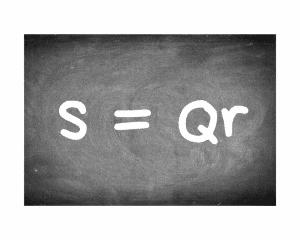 We have something to share with you. It’s nothing, really. Only…

THE FORMULA FOR SUCCESS

(No need to adjust your screens – you read that right.)

Physicist, Albert-László Barabási, has boiled this most elusive of goals down to a formula containing just three terms:

Let’s unpack this – because that tiny formula is stuffed full of big insights.

There are two essential ingredients in the recipe for success:

Ingredient #1: a generous scoop of ‘r’

In his book, The Formula: The Universal Laws of Success, Barabási explains that ‘r’ stands for ‘random idea’ – or more specifically the quality of your idea. To score highly in ‘r’ factor (which will increase your chances of success overall), obviously your idea must be a ‘good’ one.

It needs to be said that there isn’t much that can save a truly bad idea. Just think of all those movies you’ve seen where they had a huge cast, top director or blistering special effects … and yet you walked out wondering if there’s any way you can have the last two hours of your life back. (RIP A Good Day to Die Hard. Did anyone really need a fifth Die Hard movie? Even a classic star like Bruce Willis couldn’t drag that film to safety.)

Even the most successful people have the odd ‘bad idea’. See our blog on the 6 wrong turns your business heroes made (so you don’t have to) for some examples.

So, now you’ll recognise a good idea when it shows up. But here’s the fly in the ointment: plenty of great ideas have failed to succeed (or only achieved medium-level success). Why is that?

‘Q’ factor is a person’s natural talents and skills … basically it represents one’s ability to execute an idea effectively. It includes elements like drive and being open to new ideas.

The pathway to business failure is paved with the good intentions of those with low ‘Q’ factor. Just ask the Winklevoss twins…

Does anyone remember Cameron and Tyler Winklevoss? They came up with the idea that Mark Zuckerberg ultimately transformed into Facebook.

In 2002 the Winklevosses (along with fellow student, Divya Narendra) came up with an idea to help Harvard attendees connect with each other online. They called it HarvardConnection (it was later known as ConnectU) and they had lofty plans to roll this social networking idea out across US schools. All the good ideas were there – you could add friends, send them messages and update your profile to let people know what you were up to.

It was the idea that has changed everything. But the Winklevosses didn’t have the skills to build the site themselves, so they needed to outsource. It was this lack of ‘Q’ factor that ultimately let them down.

At this point in the story you’ll get two versions, depending on who’s telling it. We can safely say, however, that Mark Zuckerberg ‘somehow came to have the same idea’.

Zuckerberg – a then 19-year-old with ‘Q’ factor to spare – built thefacebook.com and launched in February 2004. We all know how that went.

Mix it all up and you’ll have… sweet success!

So clearly, if you have a great idea and the chops to make it happen, then, according to the formula, you are onto a sure thing.

That’s all well and good, but what if your venture is deficient in either ‘Q’ or ‘r’? Does this mean ‘game over’?

What if it’s no accident that ‘Q’ comes before ‘r’?

It makes sense that those who start a career, or a business, based on their area of talent and skill are likely ahead of the pack. If they stick with it and plug enough ideas into the equation, eventually one will hit the mark.

So, perhaps this is where you may have to be cruel to yourself in order to be kind.

If career success has been elusive, despite having many good ideas and working hard on them, then it might be time to admit that you’d be better off aligning your efforts with something you are more naturally skilled in.

For business owners, however, there may be another solution…

How can you increase the ‘Q’ or ‘r’ factors in your business?

If you have a great idea and the insight to know that you don’t have the chops to pull it off – well, that’s a problem (relatively) easily solved. Just be sure to take care of your intellectual property – you don’t want to serve your idea up on a silver platter to the next Zuckerberg.

As a leader within your business it’s important not to let your ego get in the way of your success. It is always smartest to hire people because they are better than you are at what they do.

Similarly, if you are a machine when it comes to executing ideas – if only you had one – that’s where collaboration comes in. Business advisers and coaches can be great for injecting new ideas into your business that you can then run with… all the way to the top.

So, there you have it…

Three little letters with a lot to say. It may not be the easy path to fame, fortune and happiness that we all hope for but there’s definitely some truth in what Barabási proposes.

The best news of all is that his theory emphasises that your Q-factor remains constant throughout your life. The way I see it, that leaves you plenty of time to come up with an idea that packs enough ‘r’ factor punch to really make an impact.

Previous Post: Can I quote you on that? The Tenfold guide to quoting for your small business
Next Post: Funnels are so 2018… but what were they, again? And why is HubSpot now saying you need a flywheel instead?