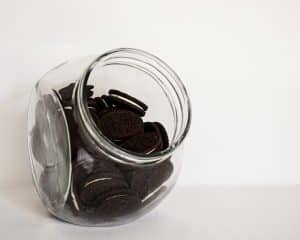 It all starts with a simple cup of coffee.  And a cheeky biscuit, just to tide you over until dinner. One biscuit won’t hurt and it goes so well with coffee and your body is craving a 3pm sugar hit.

Somehow, at the end of the month, you’re automatically reaching for the bikkie tin without even realising it and in need of larger pants. What happened?

We often form habits without thinking. Then we just can’t stop, despite negative consequences and compelling evidence that we need to change our behaviour.

As a mentor to owners of small businesses, I know the importance that habits can have on the success – or struggle – of a business.

At best, bad habits can be a drain on the business owner’s time and resources or affect their productivity. At worst, not feeling in control of routines can make business owners feel powerless and can erode their motivation and even their sense of self.

My Tenfold business coaching clients often ask me how to kick bad habits in their business or lifestyle habits that are often the barriers to their success. I mentor them to follow a 6-step process that helps them to evaluate their habits, gain insights and edit their routines by leveraging the power of the habit loop.

I have seen first-hand the positive results that this process can have in both business and personal life, so I encourage everyone – business owners, employees, solopreneurs – to get on board.

The first step in rewriting your routines is to pay some attention to them.

Once a behaviour becomes habitual, the decision-making part of your brain goes into a sort of sleep mode. We are designed to operate this way as it frees up brain processing power to perform another activity. (Have you ever been singing along to the radio and realised that you have driven all the way home without paying much attention? That’s the power of habit!)

Take action: Spend a day being mindful about the things that you always do and make a list. Once you have them all written down consider each one; are these habits serving you, or are you serving them?

2. Understand the science of your habits

To change a habit, you first need to understand how habits are created. Habits are typically formed via a three-stage process called the habit loop: cue-routine-reward. 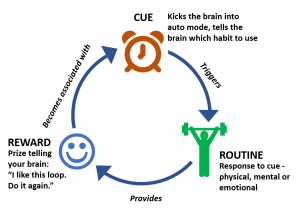 Cue
This is the trigger that signals the brain to shift into cruise control and automatically carry out the habit. In the scenario above, making a cup of coffee is the signal to your brain that it’s bikkie time!

Routine
This is the habit itself, e.g. reaching for biscuit tin and eating a biscuit.

Reward
This is the payoff that you get from carrying out the routine. There are often two rewards at play: the first reward is what you observe for yourself (Scotch Finger = tastes good) and the second reward is the brain’s reward (often a chemical rush of endorphins). The second reward is hardest to shift because it is so powerful.

Basically, every time your brain recognises the cue, it sends a signal to your body to carry out the routine, so it can have its chemical reward. Again and again and again… hence the term ‘habit loop’.

Keep in mind that you may not always be aware of the reward. For example, many of us are slaves to the alerts on our smartphone. When they beep, buzz or ding at us, we are compelled to respond by checking, even if we really want to pay attention to something else. Is it just curiosity? Probably not. Your brain knows that when you see a new text or email, it will get its hit. It takes A LOT of discipline to ignore.

Take action: Investigate your habits; determine the cue, routine and reward for each one.

3. Make positive edits to your routines

Ok, so how do you break this loop? Go to Fiji. Not a very practical solution, but brain-chemistry wise, a holiday is a great circuit breaker in the habit loop, because you are taken away from your routines and the cues that trigger them. This is often why we enjoy holidays so much; they free us from the prison of our habits! It is certainly something to keep in mind next time you are planning a trip away; it could be a great opportunity to form more positive routines and bring them back with you.

Don’t worry, there are far less expensive ways to break up with your bad habits. Basically, you keep the cue, edit or replace the routine and the reward will take care of itself. Because you aren’t making too many changes, it is easier to keep up than trying to delete the habit altogether.

For example, you have identified that you have a bad habit of micromanaging your staff. You have identified that the cue is when they come to you for advice, your routine is that you end up taking over the task and the reward is the relief that the job is done exactly how you would like it. You could try replacing the routine of taking over with teaching (giving you a similar sense of control, only with superior long-term benefits). It might take a conscious effort for a while, but you will come to crave the reward of gaining your time back and improved team relationships. Soon this new routine will become second nature.

Take action: For each cue, identify 2 more useful routines that you can attach to that cue. Make a conscious effort engage one of the new routines, see which one suits you best and commit to it.

If you go into this process and take a sledgehammer to all your routines at once, you are quite likely setting yourself up for failure. Similarly, even when addressing just one routine you may have to stage any changes. For example, if you are trying to change your habit of cracking open a post-work beer, perhaps allow yourself one or two nights a week when you can indulge. While your aim may well be to cut workday drinking out completely, it is worth remembering that perfect is often the enemy of good.

Take action: Prioritise the habits you want to change and tackle them one at a time. Make sure you aren’t expecting overnight success or a full-time commitment if that isn’t realistic.

Redesigning your habits is a marathon, not a sprint. There are going to be days where your reserves are low and you don’t have the energy to consciously make the better choice. That’s ok. If you find that you are being hard on yourself, make use of the word ‘but’ to turn around negative self-talk:
“I caved in that negotiation, now everyone thinks I’m a pushover… but… it takes time to build a new skill. I’ll learn to back myself with practice”.

Take action: high-five yourself when you get it right and stay positive when you don’t manage to make the change. Check the rear-view mirror on your progress and see how far you’ve come.

a) other people won’t know that they should be supporting you by not putting you in the way of temptation, and
b) you aren’t accountable to anyone beside yourself, so it is easier to fall back on old routines.

Getting support can be as simple as surrounding yourself with people whose routines you want to emulate. Working on being more strategic? Connect with someone who exhibits that quality and can mentor you on that journey. Want to be fitter? Spend time with more physically active friends. Any time that you spend with someone who models your desired behaviour helps to remove triggers, reinforce your commitment and encourage you to make good decisions.

Time will do the talking
In the same way it took some time to create a habit, it takes time to edit them. Experts don’t really agree on how long; there are as many suggested timeframes out there as there are self-help books! I think a happy medium exists somewhere around 30 days. It is short enough not to be overwhelming, but long enough to change behaviour. Ultimately, you will need to repeat your new routine for as long as it takes for your brain to crave the associated reward.

Once more round the loop
Habit needn’t be a dirty word. Some habits help you to carry out necessary tasks without applying too much thought and energy. For those habits that aren’t serving you, using the habit loop to your advantage is key. By simply replacing the routine in the cue-routine-reward cycle, you can more easily make long term changes to your habits and regain a sense of self-determination and step forward towards the success you want.