We have a medium-sized landscaping business, running 16 people. When we started working with Ashley about 18 months ago, it was a crucial time for us because Doug had injured his back. We had to change, but there was no direction.

We were just going along. There were three or four of us and we were content with that. If you’d asked us two years ago if the business could have had 16 people, we wouldn’t have thought of the business being able to support that. We had no idea. We never anticipated it being this big.

Ashley met with us and asked us how we’d feel if we could have the business run, and just work the days we chose, and we thought yeah, that’s for us.

The biggest benefit to business coaching has been having the confidence to grow without stressing about how to do it. It’s given us confidence in employing people and running teams. Ashley’s put a lot of order into the business, which was hard for us because we’re not that way inclined.

We look at the business differently now. The biggest change has been administration. We’re tradespeople because we weren’t good with our heads – we’re good with our hands. We knew how to get the jobs done and make money, but after that we were at a bit of a loss as to what’s needed to run a great business.

It takes the pressure off yourself when you learn to delegate everything. It took a while to let go, but we’re doing it more and more.

Our minds are still changing. Chris is still on the tools, but the way it’s heading in six months he’ll be off entirely and spending his time on quoting and sales, and doing the jobs he chooses to do.  What we learned from Ashley, everything you don’t like to do, you get someone else to do it.

We’ve changed our market. When we realised what we had to turn over, and what we had to make, we started choosing our jobs much better. Before, we wouldn’t say no to anything.

Our goal now is getting the business to function without us there. We’re not at that stage yet, but that’s our next serious step. Before we started, we wouldn’t ever have thought the business could run without us. I thought we personally had to do the work, or the client wouldn’t be happy. I was blind back then. Now I think it’s a crazy idea to think I would be on the tools.

It’s been a massive learning cove. It’s given me a lot of hope. A lot of confidence. We talked about employing leading hands for years, but we never had the confidence to do that. Now we have three. Just having Ashley there to check the figures with us, and tell us we can do it.

It’s now just starting to kick in, us managing the business at a higher level. Now we know the job on site is getting done, we’re getting into the budgets, cashflow, finances. That’s key to the business now – we need to read the business better. We’re ready to do that now.

We drive past other tradesmen now and think, wow, they have no idea. We’ve come so far, with all the systems and having everything run itself. We’re setting up a business to run, and that’s completely different to being a tradesperson. That’s our goal – to make this place turn over while we’re not here.

Our journey is not to work, but to still make money. To be smarter about how we approach our business. 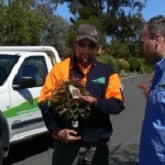