May 27, 2020 Ashley Thomson, Coaching Hall of Fame No Comments

I’m here with the COVID-19 business continuity update on Wednesday 27th May.

Today I’m writing about the indicators we can look at in the economy that signal we’re on track for recovery.

Back on 30th March I wrote to you about the 3 stages we could expect to experience during this period of unprecedented disruption:
Stage 1: Weathering the storm
Stage 2: Adjusting to the new normal
Stage 3: Preparing for the uplift

My read of the pulse is that we have passed through stage 1 and we are now shifting from stage 2 to stage 3: preparing for the uplift. The question that is on the mind of small business owners is: when will the economy (and business) get back to normal?

Nobody really knows, because this event bears no resemblance to other recessions. Nobody can have a high degree of certainty in their convictions and if they do, they are probably misinformed.

One thing I will point out is that we’re in a bubble at the moment. The unemployment benefits have effectively been doubled. Some part time employees and long-term casual workers have seen their income increase due to the JobKeeper top up payments. Some businesses are seeing improved profitability off the back of the Boosting Cash Flow, Payroll Tax refunds and JobKeeper payments. On the back of that, some people and businesses are getting hooked on a support payment drug, and it is warping the reality of the situation.

If we think back to the panic and economic concern that existed in mid to late March this year (before the survival funding announcements), that gives us an indication of what it might be like after 27th Sept when these support payments are due to be turned off.

Recovery signals – what NOT to watch

Let’s start with what NOT to watch. I’m talking about the indicators that aren’t likely to give us good visibility of the future.

Share market indices: these can and will bounce around based on that day’s sentiment. Here’s an real example of what I mean: Two weeks ago, a tiny US drug company announced they had been successful in preventing the infection of a control group of 8 people. In response to that news, share markets around the world bounced that day. The next day they dropped again as a banker released some GDP forecasts. My point is that if the share market moves up in the short term, that doesn’t give you a guide as to the impact on the Australian economy – or your business – over the next 2-3 years.

Consumer confidence: Firstly, many people bought more groceries to stockpile. Then people on unemployment benefits hit the shops to spend their windfall of the JobSeeker supplement payment. The consumer confidence indicators are being buoyed by short term events but they don’t give us a guide as to what to expect over the next 2-3 years.

Recovery signals – what you SHOULD watch

Australia performed well in the last global economic crisis (the GFC of 2008) compared to other countries. If we examine what enabled that positive performance, then we can look for those indicators and stimulus measures this time around.

Money in the hands of consumers: do you remember the $900 cheques handed out to taxpayers in 2009? As I mentioned above, money has already flowed into the economy through all of the support payments made so far; JobSeeker, JobKeeper, Boosting Cash Flow and early access to Superannuation. We can see via the graph below that this has supported essential and discretionary spending. So, we can be comfortable that this part of the GFC stimulus has been replicated. 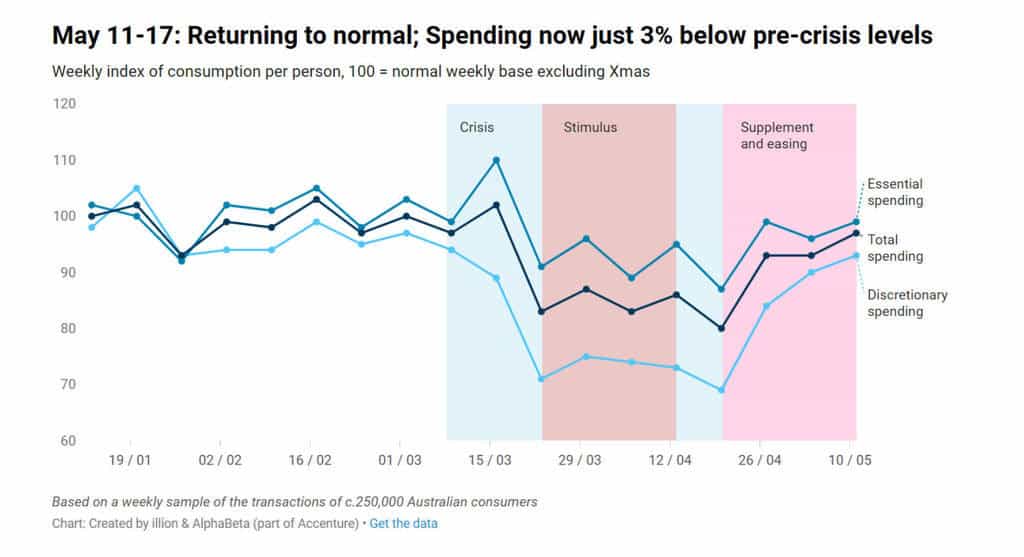 Boom in exports to China: China’s consumption of Australian natural and agricultural resources contributed to our economic resilience during the GFC and helped accelerate the post-crisis recovery.

With China cutting Australia’s barley and beef exports, this signals the potential for a reduction in the growth of exports. Watch closely to see how exports to Chinese track and whether Australia supplements these by exporting to other countries. At this stage it is unclear whether an export boom will occur and drive the local economy.

Immigration: Since the GFC we’ve seen immigration grow to and remain high. Overseas migration drives demand for new housing. In recent years, net overseas migration has accounted for an increase in Australia’s population of around 250,000 people every year. In addition to housing needs, migrants also create an increase in the consumption of other goods and services, from big ticket items like cars to everyday goods like groceries. With our borders closed and likely to remain so for a while, watch to see what policies are put in place to maintain immigration. 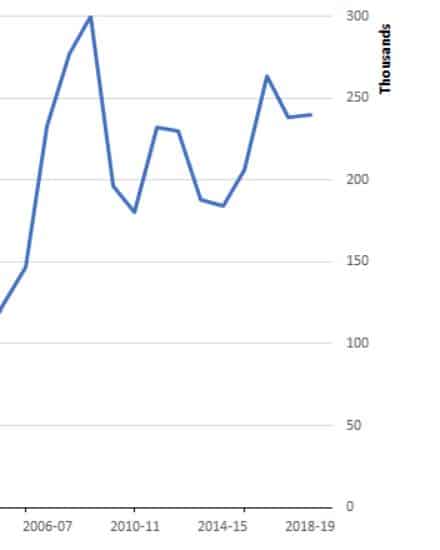 Looking ahead: the next 4 months

So, as we roll forward in the next 4 months, as wise business owners we need to look for announcements and lead indicators of those three factors occurring. Spending by consumers might be possible to influence with stimulus measures. The tension in the Australia-China relationship might put a dampener on our exports. Immigration is a challenge when borders are closed, but might pick up markedly when borders reopen.

I’ll keep bringing you updates and insights over the next few months and beyond.

My objective is to interpret the broader picture of the economy so that with the help of your Tenfold business coach you can track the likely impact on your business and steer a path to take advantage of it.

I’ve had several clients email me asking for more information on returning your team to the office. It’s good to get these requests – please let me or your business coach at Tenfold know if there are any topics you’d like more information on.