I’m here with the COVID-19 continuity update for Australian businesses on 25th August.

I’ve been doing significant research to understand how Australia will fare into the future. Just like different businesses, different countries around the world will struggle, while others will use COVID-19 as an opportunity to set up a new period of prosperity. I’m here today with a review of the market indicators that are the likely precursors to Australia’s economic recovery.

I wrote about these indicators on 27th May, with my perspective on which signals we should look to as bellwethers for recovery, and, also which indicators we should not be focusing on.

To read the full original briefing on this topic, you can access it here: https://tenfoldcoaching.com.au/covid-19-business-continuity-27th-may/

When we look in more detail at how each of our top export categories is currently performing, we see:
> Iron ore: China’s demand has increased by 10 per cent over the first half of the year and the price is stronger, a double benefit
> Coal: demand grew by 13 per cent however the price is weak
> Gas: slight increase in demand (3 per cent), price is weak
> Education: border closures continue to impact education, however a trial of international students in SA is being set up.

As we can see in this chart, Australian exports to China are now higher than they’ve ever been.

The Governor of the Reserve Bank told a national cabinet meeting last week that the states should invest $40B in one-off infrastructure projects over 2 years. This will nearly double the current planned spending by the states of $48B (and this includes COVID related stimulus project spending already announced).

The extra spending will aim to save jobs by fast-tracking new construction as well as maintenance and upgrades to public infrastructure, spreading the work across the states. The targeted areas for spending include energy, transport, housing, and schools, as well as training and other programs.

The state governments of Victoria and NSW are both carefully considering how they can do this. Victorian Premier, Dan Andrews said, “Our share of that ($40B) would be about $10 billion.”

Mr Andrews went on to say, “Over a two-year period … I’m very confident we will have significant investment of that, and more, to save jobs, to grow jobs and make sure we’ve got a strong economy in that medium term.”

I would expect that this scale of investment and the focus on immediate one-off projects would help to stabilise and stimulate Victoria’s economy, coupled with the JobKeeper extension for businesses that have been impacted more significantly than mainstream markets.

If we then look at consumer spending across Australia, it is near to the levels seen just before COVID-19 hit. As we can see in the chart below, spending was somewhat erratic and has now stabilised. The lower rate of discretionary spending is what we would expect during stage 3 and 4 restrictions, when the main activities of discretionary spending (going out for dinner, concerts, travel) are unavailable. 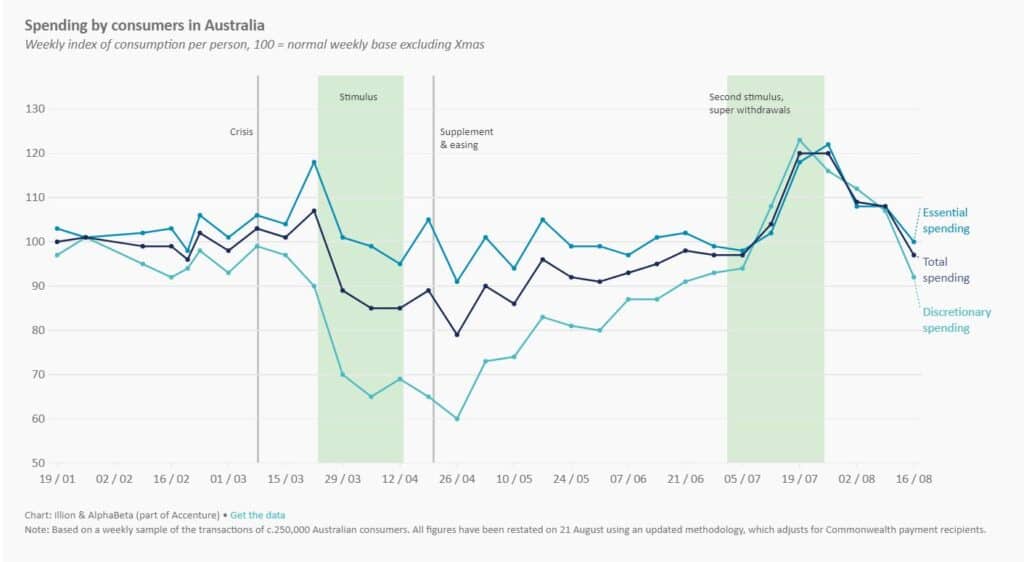 A trial is being undertaken in South Australia to allow a small number of international students from China, Hong Kong and Japan back into the state.

32% of Australia’s previous immigration was international students so this is a good sign, however, the numbers are very small at this stage with only 300 immigrants on temporary student visas granted entry.

PM Scott Morrison says it’s “unlikely” that Australia’s borders will open by Christmas, meaning that international travel will be off the cards until sometime in 2021. A less optimistic (i.e., more realistic) view comes from Qantas CEO Alan Joyce, who is not expecting international travel to open up until mid-2021.

Modelling by KPMG economists indicate that if just 40,000 skilled migrants were allowed to enter Australia, they would produce a near $5 billion boost to Australia’s GDP by the end of the decade. This kind of analysis could serve to support discussion on strategic immigration policies.

At this stage, it’s still unclear how or when Australians will loosen its international borders – the SA trial of international students may be a first step.

Looking ahead: the next 3-4 months

Strong exports, federal and state investment in job-saving/job-generating projects, and innovative thinking about strategic immigration, together form a good platform for the Australian economy to recover. Further support by way of JobKeeper and government grants for those that continue to need it will also facilitate stability.

Certainly, there will be some businesses that will not have the stamina or a long-range view of the bigger picture to get through this period, and that only increases the opportunities for Tenfold clients to take advantage.