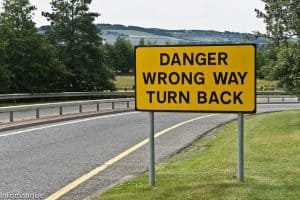 Even the most famous and successful of our business heroes bomb out sometimes. Sōichirō Honda went as far as to say that “success is 99% failure”.

The wins of the following entrepreneurs are legendary. Luckily (for you) their mistakes were just as public.

Our Tenfold coaches mentor small business owners to reverse engineer the failures of business giants and benefit from their 20/20 hindsight. Let’s examine the detours and dead-ends that these six entrepreneurs endured so you can set your course to avoid them:

“Declaring a soft drink war on Coke was madness”

Richard Branson has made countless mistakes in the process of launching close to one hundred businesses, but none stand out quite so much as Virgin Cola.

Branson had a great product but now admits that he underestimated his opponents. When Coke and Pepsi hit back with a “very systematic kneecapping job”, Branson was forced to admit defeat and declare Virgin Cola ‘over’.

The lesson: Be the best – or at least differentiate!
Despite blind taste testers consistently ranking the taste of Virgin Cola over Pepsi and Coke, Branson acknowledges that Virgin Cola failed to be ‘unique’. Branson learned that to take on established market leaders you need to be “palpably better than all the competition.”

Then along comes a tiny start-up (or should that be upstart?), Google. Microsoft’s MSN Search and Google launched the same year (1998), but while Google was speedy, innovative and user-focused, MSN Search… wasn’t. In fact, Microsoft’s offering didn’t even use its own engine (it used results from existing search engine, Inktomi),

Gates had underestimated the Internet. He was so focused on his Windows products that he simply didn’t spot the disruption or the opportunity. Microsoft had the resources to come ‘best dressed’ to the search engine party… but he didn’t even RSVP!

The lesson: Look up from your business and ‘scan’ for disruption
It might seem easier to stick your head in the sand and pretend major shifts in your industry aren’t happening. However, embracing change and leveraging the opportunities will help you stay relevant to your customers and ahead of the pack.

“In effect Murph whispered “buy” into my ear. But I didn’t listen.”

Warren Buffet may be the ‘Oracle of Omaha’ when it comes to wall street investment, but even he has his regrets. Amongst the greatest is passing up an opportunity to buy the Dallas Fort-Worth NBC station in 1972. Back then the price tag read $35 million. By the time he told his tale of woe in a 2007 letter to his shareholders, the station was valued at $800 million.

The lesson: When opportunity knocks, let it in!
Stay focused and don’t become complacent about opportunities that arise. Buffet particularly regrets this ‘one that got away’ because he knew that this was a solid bet – it had growth potential and required hardly any capital investment. His only explanation for missing the opportunity was that his distracted “brain had gone on vacation”. That’s one costly brain-fade!

Before starting her wildly successful business, Boost Juice, Janine Allis found herself being squeezed (pardon the pun) out of her first juice bar venture by a group of ‘experts’ that didn’t have her back.

When the first Sejuice store opened in Chapel Street, Melbourne, Janine knew the business inside-out. She also owned all the intellectual property and had brought the initial ‘big idea’ to the table. Despite all of this, her ‘partners’ literally laughed when it was suggested that she run the company. Allis felt unsupported, undervalued and disrespected. She made the hard call to walk away and go out on her own.

The lesson: Surround yourself with the right people
In the end, Allis formed a successful business partnership with her husband, Jeff. Their skills and attributes complemented each other – he kept things calm and grounded while she became the ‘problem solver’.  This time Allis knew she had the ‘people’ side of her business right –
“If it’s wrong, it’s just dysfunctional. You need to have a partnership in every capacity, a partner who is 100% supportive.”

After landing a big account with 7-Eleven, rather than celebrating and acknowledging the work that had gone into this game-changing milestone, Flynn’s ‘victory speech’ was, “we’ve really got to focus”.

Flynn’s mentor warned him that he risked burning out his team by worrying too much and moving too quickly on to the ‘next thing’.

The lesson: Take time to celebrate the wins
Big or small, your achievements are what will re-energise you, increase your confidence and sustain your drive to succeed in your business. This goes for your team as well (maybe even more so). Be sure to ring the metaphorical ‘victory bell’ and recognise when you and your team have performed well.

“It was poorly designed, built, launched, and engineered. And poorly executed. Poor all the way around”

MOZ CEO and co-founder of Inbound.org, Rand Fishkin, regrets going too big too fast when developing an early version of MOZ Analytics. Despite having 80,000 people registered for a trial, very few ultimately signed up. The disappointments continued to pile up when those who purchased the software were unhappy with its performance (it was ‘buggy’ and full of errors).  Rand lamented, “it took us two-and-a-half years… and when it did launch, it was a huge failure”

The lesson: do due diligence – test and adjust to market need
When developing new product or service lines, consider launching a smaller or scaled-back version to test the waters. With some customer feedback under your belt, you can then continue to build and refine your offering in the full knowledge that it will truly meet market needs and expectations.

See our guide on A-B testing to find out how you can use customer insights to strengthen your marketing efforts.

Their loss is your gain

There are some lessons in business (as in life) that you just have to learn for yourself. Each and every one of the above entrepreneurs will tell you that they are grateful for what might be considered their ‘failures’. The common thread in all six stories is that they all picked themselves up and kept moving towards their next big ‘win’.

That said, it’s smart (and less painful) to take heed of the ‘Danger’ signs left by the those who have gone before you. As Eleanor Roosevelt once said, “Learn from the mistakes of others. You can’t live long enough to make them all yourself.”

Image by William Murphy, via Flikr

Previous Post: KonMari Your Business: how ‘less’ can serve your business more
Next Post: Help! I need somebody: how a virtual assistant could help you scale your business (and keep your sanity)